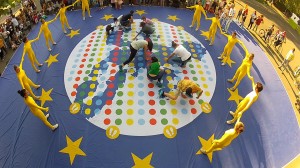 Also the Institutions, like the Rappresentanza in Italia della Commissione Europea, have given in the charm of the unconventional communication with an unconventional show in the centre of Milan; the 9th of May, for the Europe Day, it created an unusual event, a show that involved thousands of people to play on a huge european flag, where people played the Twister game.

The message was unmistakable: cross the Europe! 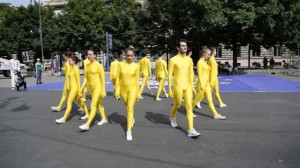 The playful form used thanks to the Mega Twister Europa was a winning idea, for the partecipation as well as for the stance: less institutional and more closed to the people, who were involved in the game in first person.

For the Rappresentanza in Italia della Commissione europea – Ufficio di Milano has been a new way to dialogue with the citizens and remember them their right and duty to vote for the European Elections of the next 25th of May, expressing an easy but effective concept: “Vote for whatever you want, but do it with your head, be an aware voter. The vote is a democratic instrument you must use”.

This is the offical video of the event’s highlights:

Twister is a game born in the 60es and in Italy it has never been seen in squares in such a huge form; it is based on indications which are given by a “moderator”, that link hands and feet to four colours. These indications are randomly given (in this case from the Twister’s app) and the participants are on the floor tangled up trying to maintain the balance.

The huge european flag, 15 mt x 10 mt, was the set of the Twister Europa from the 2:00pm to the 7:30pm. with three moments anticipated by the performance of 12 dancing stars on the Inno alla Gioia rock version soundtrack, mixed with the famous “You Make Me” by the swedish artist Avicii.

The event was in collaboration with Comune di Milano, Expo in Città, Europe Direct Lombardia and Ufficio d’Informazione in Milan of the European Parliament.